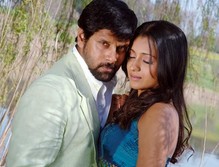 Vikram and Trisha forthcoming bilingual movie (Tamil and Telugu) `Bheema` audio was released by Pawan Kalyan and presented the first number to hero Vikram. `Bheema` is directed by director Linguswamy on Surya Movies banner, with its presentation in Andhra Pradesh through SPR Entertainments.

Harris Jayaraj scored music, while lyrics were penned by producer AM Ratnam. Producer AM Ratnam expressed his special thanks to Pawan Kalyan for being the chief guest in spite of his busy schedules.

Linguswamy who had earlier directed the film Pandem Kodi directed this film. An out and out action flick, it will be simultaneously released in Telugu and Tamil. This will be Trisha‘s big film in Telugu this year.