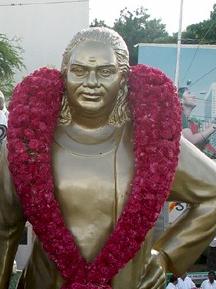 G.V. Gunasekaran is making a feature film on the leader under the title of Pasumpon U. Muthuramalinga Thevar. Right artists for this historic film are being searched and once the actor is finalized, film shooting will expected to start from January 2008.

About Pasumpon Thevar
U. Muthuramalingam Thevar, also known as Pasumpon Muthuramalingam Thevar (October 30, 1908 ? October 30, 1963) was an Indian politician. He hailed from the Maravar community, the dominant warrior caste group in his home district in southern Tamil Nadu. Thevar became the leader of the All India Forward Bloc in Tamil Nadu, and was national deputy chairman of the party from 1952 onwards. He was elected thrice to parliament.