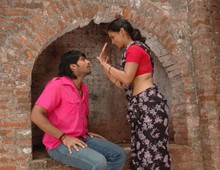 Oram Po previously titled as Auto directed by Pushkar and Gayathri, starring Arya and Pooja would be released on 30 November.
Arya’s long-pending ‘Oram Po’ is nearing completion, this movie it is about life of auto-drivers in Chennai.
Actress Pooja plays a girl selling biryani on the roadside.
Cast and crew