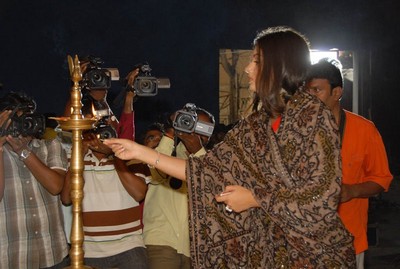 Jaganmohini Telugu version was launched yesterday at Nanakramguda, Hyderabad. Former Central minister and Tollywood biggie Dasari Narayana Rao sounded the clapboard, TFPC President Tammareddy Bharadwaj rendered the first shot direction; and D. Ramanaidu switched on the camera for the muhurt shot on lead pair Raja and Namita while both approach each other romantically and caressing each other passionately.

In the latest Jagan Mohini, Namitha is playing the title role in place of Jayamalini, while Raja replaced Narasimha Raju. The shooting of the film was formally launched. Nila plays as the second heroine in the movie, who made her debut in Aa Aah, appeared in an item number in Silambarasan’s Kaalai recently.

Next post: Chiranjeevi To Launch Political Party after August 15