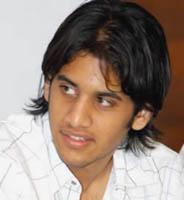 Director Puri Jagannadh is the one who introduced Mahesh Babu in ‘Pokkiri’ , Chiranjeevi?s son Ram Charan in Chiruta and Allu Arjun in ‘Desamuduru’. The movie will be made under the banner of ‘Vaishno Academy’, Nagarjuna?s own production company.

Last year Telugu mega star Chiranjeevi?s son Ram Charan made his debut with Chiruta, he proved that he is a worthy successor to his mighty father.

Will Nagarjuna’s son prove that he is also a worthy successor ? Well, we have to wait and watch.