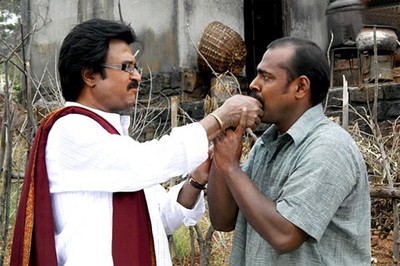 The most awaited Rajinikanth movie of the year is finally out, Here is the review.

Basically remake of the Malayalam film, Kadha Parayumbol mainly focuses on Rajini, It loses its focus on the simple story about human emotions, based on friendship between an ordinary barber and a superstar.

But, Rajini’s Kuselan is a clean family movie with comedy and sentiments and no doubt the film is surely a different attempt by Superstar Rajinikanth and Vasu.

South Indian Queen glamorous Nayanthara has no dialogues in the film and she is there just for the glamour songs with Superstar. Pasupathy has done well. Hats off to him!

Rajini plays the ‘Super Star‘ himself. It is NOT a routine Rajini’s commercial masala movie. One can find a completely different Rajinikanth the real Rajinikanth, the human being. Kuselan is quite an enjoyable watch and is different from previous Rajinikanth films. Chandramukhi(2005) was one in that kind.

For sure, there will be mixed reactions to this Rajinikanth movie, where he appears just 40 minutes. Rajinikanth fans are going to love it, great opportunity to see the real side of this magnificent actor and for others it is different Rajini movie.