Kamal Haasan is slated to play a veteran Kalaripayattu expert who takes it upon himself to train a young Japanese man in Walt Disney English film titled 19 Steps. Asin is to play as a local princess and a martial arts expert who finds herself falling in love with the Japanese lad in this period film. The film also traces the roots of Kalaripayattu. 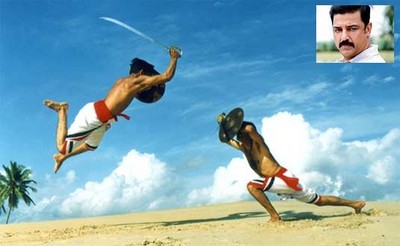 Kalaripayattu is a martial art originating and practised in Kerala and contiguous parts of neighbouring Tamil Nadu of Southern India. it incorporates strikes, kicks, grappling, martial dance, and weaponry, as well as healing techniques.

Kalaripayattu is portrayed in Jackie Chan’s The Myth and Asoka etc.

Next post: Karthik in Manirathnam’s Next Movie as Villan