Jodhaa Akbar in Tamil on March 6 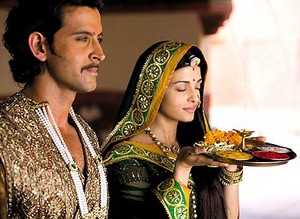 The film centers around the romance between the Muslim Mughal Emperor Akbar, played by Hrithik Roshan and his Hindu wife, Jodhabai, played by Aishwarya Rai(photos here), although in reality Akbar’s wife was never known as Jodhabai. The music is composed by acclaimed music composer A. R. Rahman.

The dubbed version slicker version of Jodhaa Akbar in Tamil releasing on ‘Mahasivarathri‘ day (March 6) all over Tamilnadu.