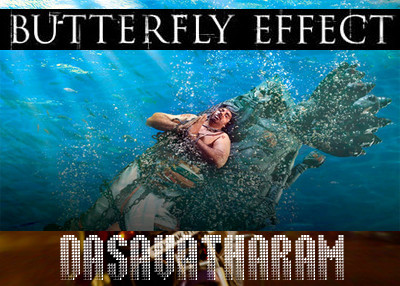 Kamal Haasan featuring Dasavatharam in ten different roles is making waves and also getting mixed reviews around the world. (Check our comments section on dasavatharam review and here)

One should understand the basic concept of the Dasavatharam storyline — Chaos theory, Butterfly Effect. Chaos theory or “Butterfly effect” has been shown in movies like “It?s a Wonderful Life”, “The Jurassic Park” etc…

Here is the excellent explanation about Chaos theory and Butterfly Effect — from the Sify.com message board.

Some guys have claimed they haven’t understood chaos theory which plays such an important part in the film. As a physics student, I’ve decided to explain it a bit so that people can appreciate the brilliance of the film.

What is Chaos theory ?
Basically a chaotic system is one wherein long term predictions are impossible. Like for example, if I push a car, I know that it is going to move and it will continue to do so if I go on pushing it on and on. However, in a chaotic system, this situation cannot be predicted over a long period of time. Weather, for example, is a chaotic system. No matter how good your instruments are, you simply cannot predict the weather with 100 per cent accuracy over a long term basis and forecast it.

What is the Butterfly Effect?
It is the most important component of a chaotic system. Basically, small perturbations results in amplifications which completely destroys the original nature of the system and makes prediction impossible. If a butterfly flaps its wings in Africa, it could result in
a cyclone in USA.(Mark the word COULD.) A highly dumbed down explanation of the butterfly effect is in the film Anniyan, where Vikram’s sister dies because a liquor shop owner sells liquor on a dry day.

OK, how does Dasavatharam incorporate it?

In essence, Dasavatharam talks about eight characters who are inconsequential as such, but are integrated in a larger picture. Without Bush, the plane would have been called back. Without Shinghen, Govind would be dead. Without the tsunami, the world would have been destroyed. Even Krishnaveni (the old woman) plays a very important role. If she had not put the vial in the idol, maybe Govind would have recovered it then and there and a powerful weapon would have been unleashed. The very fact that it went into the idol meant that it was being accelerated to its destiny. Without Kaifulllah Khan, Govind would have never escaped… the list simply goes on.

OK, so does the film talk about theism or atheism?
Neither. It talks about how humans drive the destiny of the world.

The idol that is drowned in the sea along with Rangarajan in 12th century by Chozha king results in a fault being developed at the bottom of the ocean and creates tremors more than 800 years later. These tremors result in the Tsunami. This again is a classic case of Butterfly Effect wherein a seemingly inconsequential event (the drowning of the idol) saves Tamil Nadu from being wiped off the face of the earth.

Now tell me, does THIS movie lack a story? This movie has the most beautiful story ever attempted in Indian cinema. Unfortunately, Indian viewers and critics are obsessed with the “boy meets girl” and “revenge” themes, so they fail to see the story in this master piece.