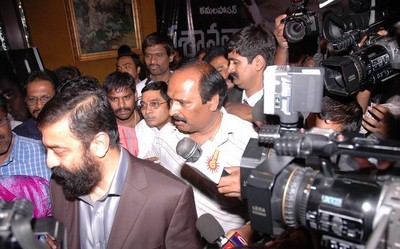 Kamal was in Hyderabad to thank the audiences for his biggest opening movie ever – Dasavatharam.
Here are the experts from his interview …..

Could you tell us about the film’s collections

These are the biggest openings in my entire career. I have seen the figures, it is a blockbuster, no doubt about it.

You have received accolades for your 10 roles. But on the other hand, critics are saying that the film is very confusing and has no story.

There is always criticism. In fact, I myself am my biggest critic. Dasavatharam is based on the chaos theory and we established it very well. I don’t know where it could be confusing. The 10 roles that I enacted are established within 20 minutes of the film’s run. The only thing is one has to be a little attentive. That`s what we were going for.

What are the best compliments you have received so far?

My Guru K Balachander brought me to tears with his praise after watching the film. Never did I expect such a response. My friend Rajini said he wanted to watch such movies alongside audiences in theatres.

Do you really believe that the American President George Bush doesn’t know what NACL is?

Not just NACL, he doesn’t know many things. I didn’t want to go into that. He said recently that the reason for rise of prices is due to over consumption of Indian food products.

What are your next projects?

My next film is Marmayogi. Then I will do Marudhanayagam, and I hope I will get enough money to make it.