Thala Ajith is back…(his testing time is over and he certainly passed). The 27-year old Rajinikanth’s remake is action and stylishly packaged. The gorgeous Nayanthara as Sasha is a show stopper and no Tamil heroine has looked so glamorous on screen in recent times. 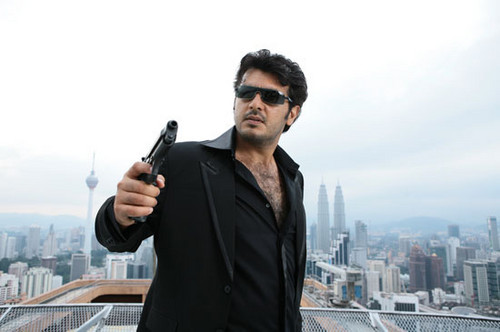 After the superstar’s hit Sivaji– Billa, the remake of the 1980 Rajinikanth starrer with Ajith in the lead, is billed as one of the biggest releases in South Indian cinema in recent times.

The film is set in Malaysia to give it a rich look. Billa (Ajith) is a modern day suited and booted underworld don who moves around in the company of two glamour girls Sasha (Nayanthara) and CJ (Namitha) who are part of his gang. Billa deals in all nefarious activities like gun running and drugs and has connections with international mafia gangs. The police force in 11 countries is in hot pursuit of Billa who they feel will lead them to Jagdish, the kingpin behind all the illegal operations. After successfully dodging the cops across the world, Billa is eventually pinned down by a sincere DCP of the Malaysian police Jaiprakash (Prabhu) after a spectacular car chase in which he is fatally injured.

Ajit fans celebrating outside Albert Theatre,chennai on the day of Billa release?

Next post: I am not engaged to Yuvraj Singh, says Deepika Padukone