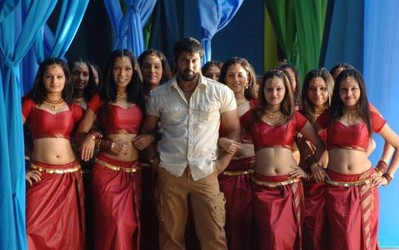 Vikram’s Bheema is an Action Thriller

Sekhar(Vikram) son of an honest police man grew up in small town Rameswaram, admiring the dare-devilry of a local ?goonda? Chinna (Prakash Raj), a man who was daring at the same time caring. Right from his childhood Sekhar?s role- model was the kind hearted Chinna who later became a top gangster with human emotions even though he is an extortionist and a killer. Sekhar joins Chinna?s gang, and climbs up the ladder to be his most trusted henchman. Meanwhile a turf war breaks out between Chinna and the dreaded don of the city Periyavar (Reghuvaran) and his sons.

Thanks to brawn and brains of the one-man fighting machine called Sekhar, Chinna and his gang is able to lord over the city which results in a gang war with the Periyavar gang. The new police commissioner (Ashish Vidyarti) declares his own private war against the gangs and forms an elite group of young police officers to exterminate the gangsters through carefully planned encounter killings. Meanwhile Sekhar falls in love with Charu (Trisha), which complicates things further. All this leads to a bloody shoot out in the end resulting in total mayhem, as the rule of the law takes its course.