Amitabh Bachchan was discharged from from Lilavati hospital on Friday morning. he had spent six days in the hospital following complaints of abdominal pain.

He was admitted on his 66 th birthday on October 11. Son, Actor Abhishek and daughter-in-law Aishwarya Rai accompanied Amitabh in in his own car. 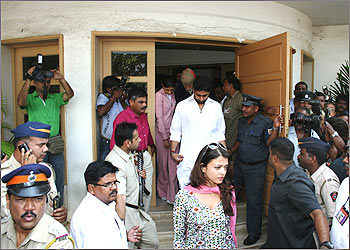 Aishwarya Rai and Abhishek when Amitabh was admitted