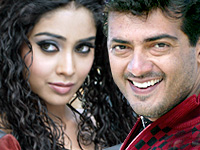 Ajit’s next film would be “Akbar“, being directed by Raju Sundaram and produced by Ayngaran International. The buzz doing rounds in the industry is that Ajit has made it clear to producers and director that he would prefer a replacement for Shriya as his heroine. Now the director is in Mumbai looking for a new heroine.

Shriya has done that item number with Vadivel in Indralokathil Naa Azhagappan and there was some issue with ajit Vadivel during the shoot of Raja, a few years back –as per media sources this made Ajit to change mind.

For Shriya it may be a setback, but she has 3 hindi movies, one Hollywood film opposite the hunk Jessie Metcalfe and Kanthaswamy with Vikram in her portfolio.

Next post: Misss China Zi Lin Zhang is the MissWorld 2007