Abhishek Bachchan will be seen in a guest appearance on Colors’ popular show ‘Balika Vadhu’.He would be seen interacting with the prime characters of the show Anandi, Shugna and Jagdish. 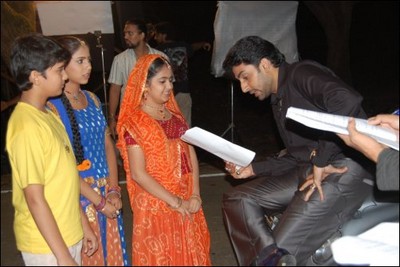 Set in rural Rajasthan, Balika Vadhu traces the arduous journey of child bride Anandi from the brink of childhood to womanhood. Married at the tender age of eight, to an equally young Jagdish, she enters a new world which is at once alienating and confusing. and torn away from the merriment of childhood and her family, she has to accept and accustom herself to this new family of strangers, new relationships and accept her roles as a friend, lover, wife and a mother as she forges her way in the world.

Balika Vadhu very sensitively portrays the plight of children who are unwittingly forced into marriage, in the name of tradition, and have to bear the repercussions for the rest of their lives.

Next post: Quantum of Solace Release in India On 7th November