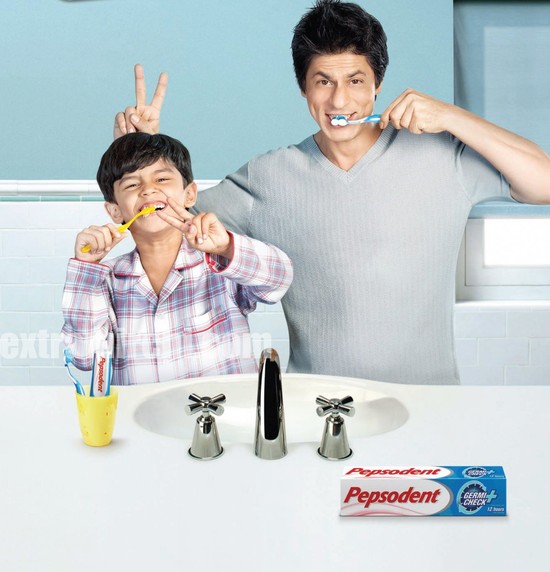 Pepsodent, Hindustan Unilever’s leading oral care brand, will be launching the “Papa & Pappu (P&P)” campaign to encourage fathers to spend quality time with their children and make brushing more fun. Bollywood superstar and a devoted father in real life, Shahrukh Khan has been signed on as a brand ambassador to lead by example and drive the campaign message.

The campaign appeals to fathers to spend just 2 minutes with their kids to brush their teeth which will help remove 95 percent of the germs and in the longer-term build a strong relationship with their children. With this campaign, Pepsodent attempts to make brushing, an otherwise mundane activity into an interesting event where fathers can spend quality time with their children and instill good habits laying the foundation for stronger father-kid relationship.

The TV campaign revolves around two characters, Papa (played by Shahrukh Khan) and Pappu (played by child actor Keval), a father and son duo who make brushing enjoyable and exciting. The advertisements will take viewers through the life journey of Papa who uses humor and storytelling to educate his son – Pappu on the importance of two minute brushing and killing up to 95 percent germs.

Papa & Pappu is a simple concept, inspired from realities of the modern lives where both parents are working, and they do not have enough time or energy to play with or educate their kids on oral health, a serious and generally ignored health concern in India.

With hectic lifestyles, involving parents to brush their teeth with their children is beneficial to nurturing good oral health habits at an early age. When a routine becomes an enjoyable experience, both children and parents stop treating it as a task and instead look forward to spending time with each other. The result, children are more likely to adopt these habits as part of their daily routine and continue throughout their adult life.

Srinandan Sundaram, Category Head – Oral Care, Hindustan Unilever Limited says, “The parent-child relationship is increasingly a concern and currently the focus for building better and healthy families. In this modern age, we see parents engrossed in work and missing out on engaging with their children. Through the Papa & Pappu campaign, Pepsodent attempts to put forth this issue and reach out to parents, encouraging them to spend quality time with their family while instilling health habits in their children.”

He adds, “Shahrukh Khan is the best choice for ‘Papa’ in the campaign as this super successful actor also practices what he preaches. He is the perfect role model of a father who finds ways to spend time with his own children away from his active schedule and stardom.”

Next post: Shobhana with her adopted daughter Anantha Narayani – Pic