Shah Rukh in Another Smoking Controversy

Controversy won’t stop in Shahrukh Khan space it seems, now he has been reportedly roped in another smoking controversy.

Actors Shah Rukh Khan and Anushka Sharma were shooting for their film “Rab Ne Bana Di Jodi” in a Sikh college in Amritsar. 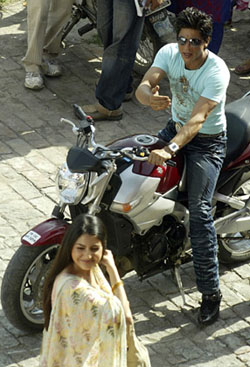 Media sources reported that Government of the Punjab has filed a complaint against SRK after the he was spotted smoking on the college premises. Smoking is prohibited in Sikh religion and in all Sikh institutions. Punjab Government denied receiving of any such reports from the college authority.

No report had been sent by the Punjab government to the union Health Ministry. I don’t know where these reports are coming from

In August this year, The chain-smoking giant of the Bollywood box-office Shah Rukh Khan has said that he is going to quit smoking in the next two months.