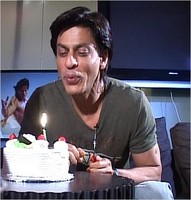 King Shahrukh Khan (born November 2, 1965) celebrated his 42nd birthday in a unique way, by inviting select media to his home for a more personal cake-cutting celebration.

Khan started out his career appearing in several television serials in the late 1980s. He made his film debut with the hit Deewana (1992), and has been part of numerous commercial successes, delivering a variety of critically acclaimed performances as well.

We wish the superstar SRK a beautiful birthday on behalf of his Fans!