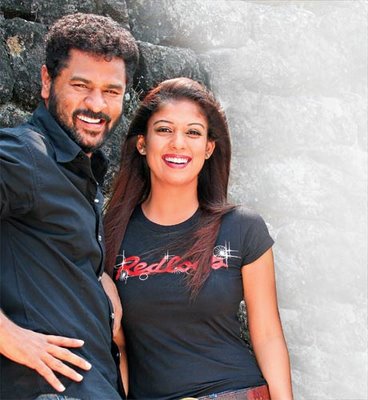 Looks like Prabhu deva and south indian glam queen Nayanthara love story is not over yet. According to sources, Nayanthara flew from Kolkata to Mumbai to watch Prabhu Deva’s movie Wanted, his debut film as director in Bollywood. Earlier we reported that she has Prabhu Tattoo in her hand.

Prabhu Deva’s wife Ramlath, in a recent interview to a popular Tamil daily has accused nayanthara,

I once talked to her (Nayantara ) over phone and requested to stay away from my husband. But she didn’t pay heed to my plea.

He (Prabhu deva) is a gentleman. His affection on family is really great. He still loves us a lot. But he is currently in the magic net (maaya valai) of Nayantara.

If Nayantara could throw Simbu (she is his former sweetheart ) out after being on the verge of marrying him, what is the guarantee that the same fate would not befall my simpleton husband.

If Ramlath ‘s allegation and his love affair is true, Prabhu Deva must put an end to his not so required relationship with Nayanthara, as his family is already distressed by the death of their 12-year-old son Vishal due to cancer six months ago.

Next post: Want to be a Kingfisher Swimsuit Calendar Girl ?