A.R. Rahman, who celebrated his 43rd birthday on Tuesday launched Nokia’s music phone Nokia 5800 in an amid fanfare. A.R. Rahman has been associated with Nokia for several years now. 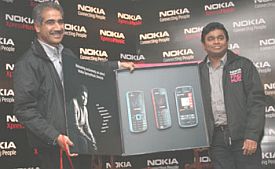 A.R. Rahman has composed an entire album ‘Connections’ for Nokia which is preloaded in this phone and three other models in the XpressMusic series.

Priced at Rs 21,899, the phone is equipped with high resolution 3.2 inch display and stereo speakers with surround sound. It comes with 3.2 megapixel auto-focus camera with Carl Zeiss optics and dual LED flash and has 8GB expandable memory.

Next post: Hindi Channels Viewership Rating – STAR Plus Most Watched