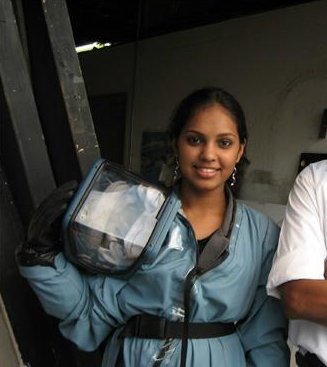 Actress Shammu made her debut in Kollywood with K.S. Ravikumar’s ‘Dasavatharam’, in which she played Kamal Haasan’s colleague in the scientific research lab. Now it’s been heard that she has been offered a film by actor Ajith Kumar.

Some of her closer sources just leaked the news that actor Ajith Kumar has offered Shammu to play female lead role in his next film.”

“But later, it was confirmed that that was just a baseless rumor fabricated by the closer circuit of actress to turn the focus on her , since she hasn’t got any offers now.”

Well, the actress was lucky as she was offered to play female lead in Jeevan’s ‘Mayilu’. As the film’s producer Prakash Raj witnessed her profound performance, he recommended her for Priyadarshan’s National award winning film ‘Kanchivaram’.

Of course, Shammu was the one, who donned the role of Prakash Raj’s daughter in this film. Apparently, the actress bagged couple of offers – Karan’s ‘Malayan’ and ‘Maathiyosi’.

Next post: Saif Ali Khan – I was quite bad actor when I started