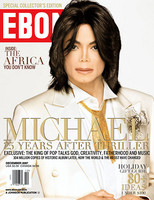 The King of Pop Michael Jackson, granted Ebony magazine an exclusive interview for the magazine’s December issue to celebrate 25 years of his landmark album, ‘Thriller’. It is his first cover interview in the past 10 years.

Thriller was released on December 1, 1982. It was Jackson’s most popular album and catapulted him to international stardom when it was released.

The troubled singer unveiled his pale new look on the cover of Ebony magazine in a heavily airbrushed photograph. Despite ongoing rumours that he has bleached his skin, Jackson has regularly insisted that his changing colour is not intentional.

On Nov 27, Michael Jackson is expected that he will be releasing a 25th Anniversary Edition of his best-selling album, “Thriller”.