Violinist Kunnankudi vaidhyanathan passed away yesterday(September 8th) at a private city hospital in chennai, He was 73. He experienced a sudden ailment and he was admitted in hospital and was kept under emergency care before he died. 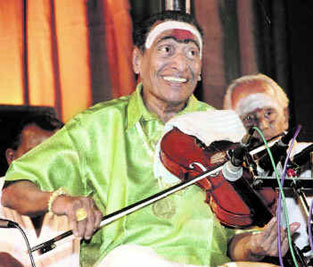 He is considered by many to be an arresting and innovative violinist in the Carnatic Genre. He was awarded the prestigious “Padma Shri” title by the Indian government, “Sangita Mamani”, “Best Music Director” award and more than 200 other awards.

Kunakudi Vaidyanathan made a speacial appearance in the 2005 Tamil blockbuster movie Anniyan directed by Shankar.

Our Sincere Condolences to Violinist Kunnakudi Vaidhyanathan family and friends.