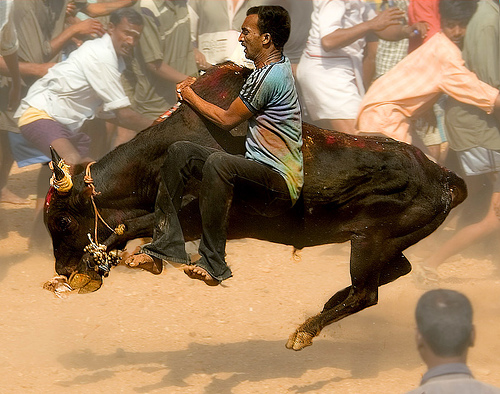 The Supreme Court of India has banned the traditional bull fight Jallikattu, has come as a dampener in 11 districts of Southern Tamil Nadu as the event would be missed for the first time in its history during Pongal festival.

The order against “Jallikattu“, also a popular attraction for tourists, including foreigners, evoked strong reactions as the order came just days before the Jan 15 Pongal festival, during which it would be held in several places.

“Jallikattu“, regarded by the locals similar to the Spanish Bull Fight, was believed to be in vogue since the days of Pandyas in the 13th century to display the valour of the youth.

Although it sounds similar to the Spanish running of the bulls, it is quite different. In Jallikattu, the bull is not killed and the ‘matadors‘ are not supposed to use any weapon.

It is held in the villages of Tamil Nadu on the eve of Mattu Pongal, one of the 4 days of Pongal festival (usually January 15 on the Western calendar). The one held in Alanganallur, near Madurai, is the most popular. This sport is also known as “Manju Virattu“, meaning “chasing the bull”.