Fans belonging to Rajini Narpani Manram in Coimbatore has launched a political party to put pressure on the Superstar to foray into politics. 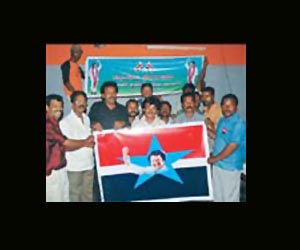 Party’s name is Desiya Dravidar Makkal Munnetra Kazhagam (DDMMK) with party tricolor flag in red, white and black ( Rajini’s face inside a shining star). Rajini is expected to meet his fans at his Raghavendra Kalyana Mandapam once he comes back from Goa Endhiran shooting.

All eyes are now turned on superstar. Rajinikanth is yet to comment on this.