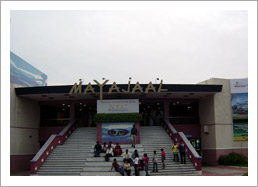 Chennai Mayajaal created a record when it screened 48 shows of Kamal Hassan’s Dasavatharam in its 10 screens per day during the last weekend. No other multiplex in the world has screened so many shows of a single film a day – It is a world record ofcourse !