This marks 2nd Grammy for Hussain. His first, in 1992, was also the first-ever Grammy in the World Music category. 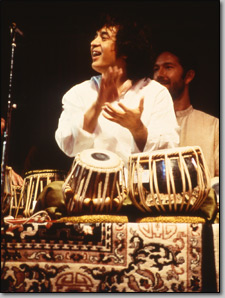 “Global Drum Project” is the second collaboration between Mickey Hart and Hussain after their compilation “Planet Drum” which was released in 1991 and went on to win the first-ever Grammy Award in the World Music category.

Next post: Madhuri Dixit at Hair and Make Up Fashion Week