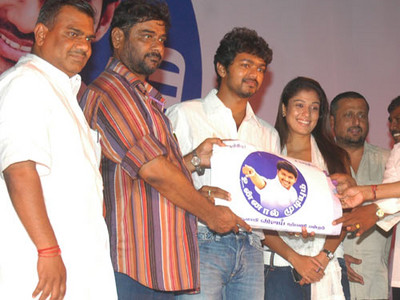 Illayathalapathi vijay celebrated his 35th birthday by unveiling his fan club flag at the University center auditorium in Chennai — huge Vijay fans were present at the function. Vijay’s father S.A.Chandrasekhar, Actress Nayanthara, Dharani, Sathyaraj and many other were present.

Flag reads as “Unnal Mudiyum” (you can) with Vijay’s face against the blue background.

Here is the photos.