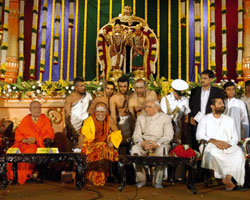 The concept of the channel is to provide enlightened entertainment in the modern context, which will allow the masses to revisit ancient Indian culture and traditions.

The channel has shot a lot of content and plans to run shows in the language spoken by various spiritual heads, rather than dubbed versions to cater to audiences in different states.

Next post: Akshay Kumar – The Sexiest Man Alive Of 2008 By People

Previous post: Newsweek – 50 Most Powerful People in the World