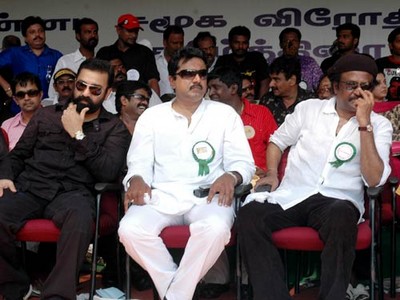 Speaking near the Chepauk cricket stadium where Tamil film stars were on hunger strike in support of the Hogenekkal drinking water project, Rajnikanth the superstar blasted Karnataka politicians over water project.Rajnikanth blasted by saying

I unequivocally condemn Karnataka for this reprehensible act of denying us what is rightfully ours. Those who are raising the issue are doing it for the elections.

A national political party I respect is forcing me to wonder by its despicable acts whether there is (rule of law) in this country (guaranteed by) the Supreme Court.

It was a cheap act by a leader of a big national party and an election gimmick. I do not approve it. The party’s (BJP) Tamil Nadu unit is keeping quiet, he added.

Rajinikanth requested the Tamil Nadu leaders including Kalaignar that,

This issue should be nipped in the bud. This is the right occasion

Rajini warned the leaders like Deve Gowda, Kumarasamy, Yediyuurappa, and Siddharamaiyya, that the people would teach them lesson if they continue to play with the issue for political gains.

People are equal to God. They would not remain silent if you continue to act in such manner , thundered the Superstar.