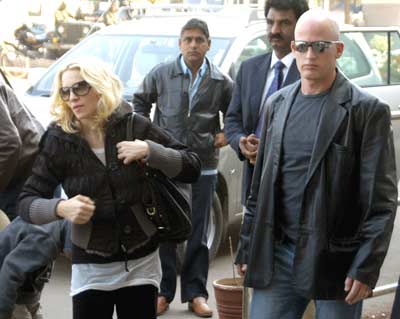 Superstar Madonna has taken a break from her hectic schedule to take her family on holiday in India.

The star, her director husband Guy Ritchie and their children Lourdes, 11, seven-year-old Rocco and two-year-old David, have visited Rajasthan’s famous Nathdwara temple along with her husband Monday afternoon and prayed at the revered shrine. Madonna, who has extended her stay in Rajasthan, visited the Srinathji temple in Nathdawara, around 50 km from Rajasthan.

Pop star Madonna , walked around Mumbai Cuffe Parade, a seafront neighborhood where million-dollar high rises sit next to fishermen’s huts, typical of the gulf between the city’s richest and poorest.

She visited a motorcycle mechanic’s garage and a market of old curios in a grimy Muslim quarter where she looked at the shops from inside her car.

Madonna, 49, is expected to be in Mumbai for the next three days. Madonna family have fallen in love with the cultures and traditions of the country.

Madonna seemed to be following in the footsteps of British pop singer Natasha Bedingfield, who during her surprise visit to Mumbai in November 2006 had spent two days in a slum in Kandivli, northwest Mumbai.

The singer is set to feature in the Rock and Roll Hall of Fame later this year.