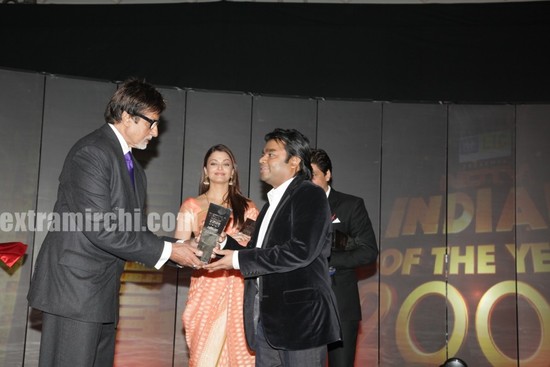 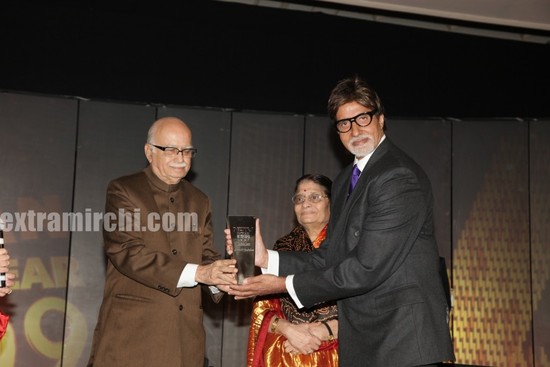 ‘NDTV Indian of The Year’ honours distinguished visionaries, political leaders, sports personalities and entertainers who have done exceptionally well and have raised the Indian flag high. This year as NDTV completes 21 years, the award also salutes icons of change for the past 21 years.

Special Recognition was also conferred upon:
Rukhsana Kausar from J&K with Bravery Award, for her act of courage against terrorists;
Aradhana Gupta with Extraordinary Indian, for her crusade against injustice to her friend Ruchika Girothra;
Babar Ali from Murshidabad with Extraordinary Indian, for running afternoon school for underprivileged kids in his village;
Bhopal Gas Peedit Mahila Udyog Sanghathan with LIC Unsung Hero for spearheading movement for the tragedy’s victims
Karan Johar as Social Networking Icon of The Year, for making tweeting popular especially amongst Bollywood
Anurag Kashyap as Special Jury Mention(Bollywood) for making unconventional cinema popular
Shashi Tharoor as New Age Politician for using new media to reach out to people

The other winners of NDTV Indian of The Year 2009 are:

Mr. P Chidambaram, Home Minister as guest of honour said, “We will be talking to Pakistan with a list of issues which we want to discuss. We can’t change our neighbours but we can change their attitudes”. On the talks with the Maoists Chidambaram said, “We are willing to talk to them if they say that they’ll abjure violence”. Lending support to Shahrukh Khan on the recent protests over the release of MNIK by Shiv Sena, Chidambaram added, “The attack on MNIK was an attack on the Idea of India. I had told the government of Maharastra that the whole of India is watching them. I am glad that all of Mumbai came on the street to show their solidarity towards Idea of India”.

On being given a choice between Mamta Bannerjee and Laloo Prasad Yadav as Railway Ministers, Nitish Kumar, Chief Minister- Bihar said, “I appreciate the budget presented by Mamta Bannerjee as a Railway minister, I think she has presented a good railway budget.” He credited the people of Bihar for working for growth of the state indicated by the robust 11% growth in Bihar

Shahrukh Khan while thanking on being conferred with the title of India’s Icon of Last 21 Years in Entertainment said, “I think with Twitter I can share what I feel with my fans
frequently as lot of people share their daily routine and Karan Johar was the one who inspired me to use twitter to connect with my fans”.

Biz Stone, Co Founder of Twitter who joined live from California in his first ever interview to an Indian media said, “We have been surprised to see the amount of tweeting in India. It’s a very happy surprise. India has a very vibrant society and has a mobile centric culture. There is a lot of scope for growth. We have to continuously better ourselves. Its simple… we have to innovate and improve.”

T S Krishnamurthy, former Chief Election Commissioner on receiving the award of India’s Icon of Last 21 Years on behalf of Election Commission of India said, “India’s experiment in introducing electronic voting machine is unique. It’s a robust instrument. When it was introduced in 2004, we were quite apprehensive, but EVM has established itself as one of the finest tools of election management.” He further added, “Both Indians and foreigners have been happy with the use of EVM.”

Sachin Tendulkar on receiving the India’s Icon of Last 21 Years in Sports, commented, “It has been a great journey starting in 1989. People have stood with me and behind me. 21 years from now, I would like to see most of the country playing cricket and look forward to globalization of the game.” On being asked where he sees himself and Indian Cicket team 21 years hence, Mahendra S Dhoni who shared the same award with Sachin Tendulkar said, “I see Indian team winning the gold in Olympics. I’d like to do my bit for sports in the country by opening my own sports academy.”

While referring to Satyam takeover by Tech Mahindra, Anand Mahindra said, “Montek Singh Ahluwali was the unsung hero of the whole episode. Government played a very crucial role in the Satyam bailout and Montek spearheaded the efforts.” N R Narayan Murthy on his outlook for Indian economy for the next two decades said, “When every child in the country gets access to basic healthcare, education and shelter, we will fulfill the dream of the Founder of our Nation(Gandhiji) and then we will succeed. And I am quite optimistic about the same.”

L K Advani who presented the award to Amitabh Bachchan applauded his work and said, “I have seen almost all of Amitabh’s movies right from Saath Hindusthani to Paa and hope that he continues to entertain us with exceptional movies like Paa. Bachchan parivaar is like a family to me.”