China has achieved another of its global ambitions when a 23-year-old secretary— Miss China Zi Lin Zhang from Beijing was crowned Miss World 2007. 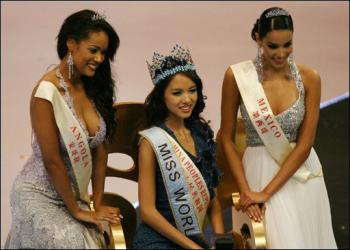 Zhang Jilin took the crown in Sanya, a resort at the sub-tropical southern tip of China’s Hainan island. At 182cm, she was the tallest of the 106 contestants.

Miss Angola Micaela Reis, 18, was the first runner up while 19-year-old Carolina Mor?n from Mexico was the second runner up at the gala Dec 1 night held in the Crown of Beauty Theater at Sanya in Hainan province.

The 57th Miss World beauty pageant was held to coincide with World Aids Day in an effort to raise awareness of the disease.

One of the highlights was Mandla Mandela, grandson of Nelson Mandela, introducing his grandfather’s televised message on World Aids Day. It was followed by children from South Africa and a local school and all the contestants joining in singing the World Aids Day song.