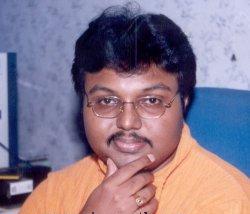 Music composer D Iman made his debut in films with ‘Whistle.’ The song “azhagiya asura...” from the film was a super hit and Iman became sought after.

Iman is now betrothed to Monica, the daughter of Richard and Rita from Chennai.

The betrothal took place on Feb 1 at Chennai. Monica has a BE degree. The wedding is to take place on April 24 at 7pm at St. John’s Cathedral in Chennai.