The CNN IBN Indian of the Year 2009 award was given to Oscar Award winner Ace musician A R Rahman by Indian Prime Minister Dr. Manmohan Singh. 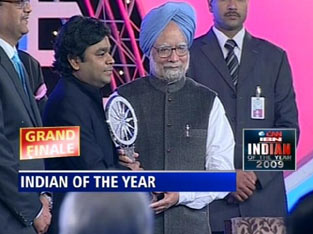 Prime Minister Manmohan Singh sais that A. R. Rahman’s music is an inspirational. He added that when he heard his songs in the White House, he had a sense of joy and achievement.

“It is a triumph for music. I hope it inspires more people and lessens the divide,” said the Oscar winning music maestro.

A R Rahman was also declared the recipient of the CNN-IBN Indian of the Year 2009 in the Entertainment category.