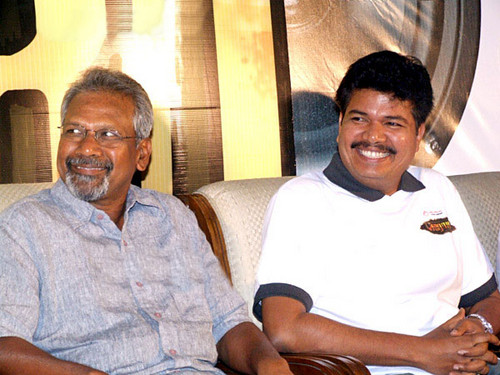 Guess what’s so common between ace filmmakers Mani Ratnam and Shankar? Well, they’re one of the most happening filmmakers of South-Asian film industry. Their films always find a great place in the global box office. They’ve been supportive for their protégés and launched them under their home banners.

But the common factor between the two is the ‘heroine’ factors.

These filmmakers have the habit of casting the same actresses in their films at times.

It all started with Madhoo, who played the female lead in Mani Ratnam’s ‘Roja’ released in 1992. The following year marked the debut directorial of Shankar with ‘Gentleman’ and Madhoo was offered to perform the ladylove of protagonist (played by Arjun).

Similarly, Mani Ratnam opted for Manisha Koirala in his blockbuster ‘Bombay’, which was based on the real life conflict between Hindu and Islam community after Babri Masjid attack. So it was no surprise that Shankar roped in the same actress for his multi-lingual film ‘INDIAN’ starring Kamal Haasan in dual roles. Later, she was offered to perform female lead in his other project ‘Mudhalvan’ as well…

And then it was all about Miss World Aishwarya Rai– She made her debut in film industry with Mani Ratnam’s ‘Iruvar’. Couple of years later, she starred opposite Prashanth in Shankar’s mega-budget film ‘Jeans’.

Mani Ratnam’s assistant Shaad Ali remade his ‘Alaipayudhe’ in Hindi as ‘Saathiya’… It’s worth mentioning that Mani himself suggested Rani Mukherji for the female lead and again she was offered to perform one of the female lead roles in ‘Yuva’. Apparently, when filmmaker Shankar remade ‘Mudhalvan’ in Hindi titled ‘Nayak’, he had no options other than Rani Mukherji herself.

Finally, both the filmmakers have again zeroed down on Aishwarya Rai in their films. It’s noteworthy that Aishwarya starred opposite Abhishek Bachchan in ‘Guru’ and again they’re pairing together in Mani Ratnam’s upcoming film ‘Raavana’ (Aishwarya does female lead in both the versions). Similarly, the Miss World will be spotted sharing screen space with Superstar Rajinikanth in Shankar’s ‘Endhiran’.

It’s almost a couple of decades (1991– till date) and these filmmakers are still adhering to such traits.