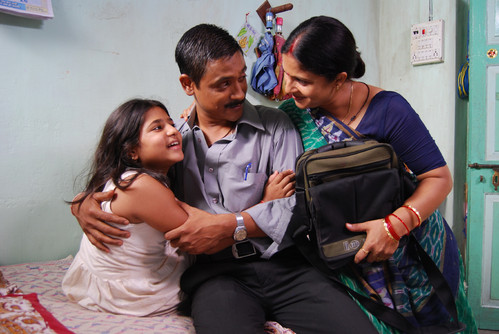 Subrat Dutta, the main lead of “Madholal Keep Walking” has won the Best Actor award in Cairo International Film Festival, Egypt. Cairo film festival is one of the prestigious events, which is held every year to celebrate the fine art of cinema round the globe.

The main focus of Cairo International film festival 2009 was Indian cinema, and it brought Indian films like ‘Gulaabi Talkies’, ‘New York’, ‘Kaminey’ and ‘Madholal Keep Walking’ to the fore.

Moving on to the nominations, the only two Indian films in the competition category were Kabir Khan’s ‘New York’, and Jai Tank’s ‘Madholal Keep Walking’. The nomination was very honorable to Jai Tank as his film was nominated along with “New York” a big banner film. The real stars of the festival turned out to be Subrat Dutta as Madholal Dubey in “Madholal keep walking”. A Kolkata-based theatre actor who has won the Best Actor award in the 8th Osian Cinefan Festival 2006 for the Bengali film- “Bibar” (Calcutta unabashed). So far, played main characters in more than 10 films in four languages and major roles in 8 films. His last Bengali movie ‘Chaturanga’ (four chapters) as lead actor (Sachi’s) shown in more than 50 film festivals.

Jai Tank’s first-feature (he is a director of documentaries and public service films) takes us through the daily life of a Mumbaikar. Madholal is a story of humanity. Madholal’s simple life has modest dreams and usual challenges. The times were perfect. A supportive wife, loving daughters and trusted neighbors. Each morning Madholal starts a journey with his inseparable comrades on the local train squabbling and laughing all the way they pass the journey. Till the tragedy strikes. One-event blows it all into smithereens shatters the very fabric of Madholal’s life. Come the testing times for a family, a neighborhoods and a friendship. He has to himself put them back together to defeat the purpose of the wrongdoers. A misfortune can cripple him but can’t stop Madholal. He takes his first step towards bringing his life back on the tracks. Come hail or storm Madholal has to keep walking.

A cowardly act of terrorism puts a man’s character and grit to test. Film is a microcosm of basic human emotions. It represents life as an odyssey. We all are cogwheels of the machinery that has fallen apart due to external and evil events beyond our control.