Sir Ben Kingsley India is in my bones says 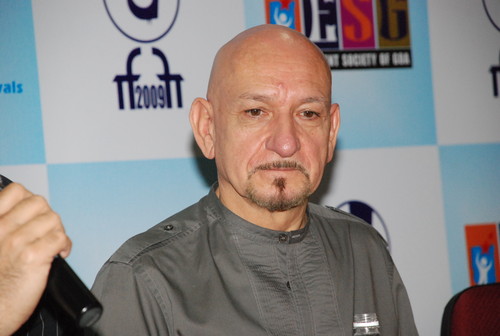 India is home for me and one does not visit but comes home, said Sir Ben Kingsley at a press conference at IFFI Goa today. He said that like a long lost melody or a forgotten perfume, the extraordinary welcome has assured him that the thread that was created in 1981-82 during filming of Gandhi has not snapped. “Same juices are flowing in my body, the same as when Attenborough said action for Gandhi,” said the legendary actor who is the guest of honor at IFFI Goa.

Remembering the shooting of Gandhi, Sir Ben Kingsley said that the performance was made possible by the extraordinary trust that was put in him and the rapport that he shared with fellow actors like Roshan Seth, Rohini Hattangadi and Neena Gupta. “It was like echo from history, like Gandhi-Nehru relationship there was Roshan Seth-Ben Kingsley relationship,” he said. The actor informed that when the role was offered to him, he recognized something in Gandhi ji’s personality. He was impressed by the way Gandhi ji converted his anger to something gracefully constructive. He said he thought that he will snap out of Gandhi’s role, but today he again felt the pull. He informed that Harold Pinter wrote his next two films and the modern stories of these movies helped him to come out of the image problem that role of Gandhi may have imposed on him. The actor further said that you couldn’t have a Gandhi like role because Gandhi is only one.

Ben Kingsley compared Satyajit Ray’s understanding of human struggles with Shakespeare and Tolstoy. He said that Ray was capable of conveying the whole array of nuances with a very small shot. He said among the contemporary Indian directors Mira Nair is definitely very interesting. He said that as opposed to quick cutting western style Indian directors allow a shot to stay on the screen and have its impact.

Recalling his experience of working with Amitabh Bachchan, Ben Kingsley said that he found the Indian star very wise, kind, intelligent and a joy to work with.