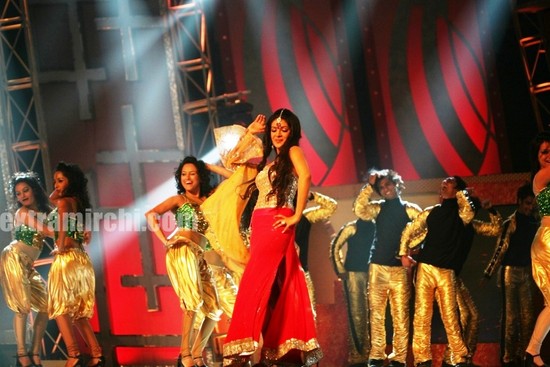 After the mind-blowing performances of the two Khans, Shahrukh and Aamir in the past two weeks, Vivel Soap presents Star Cintaa Superstars ka Jalwa presents the most handsome Khan on the block – Salman Khan, this week. Catch the mind blowing performances by Bollywood’s all time heartthrob which will you leave you asking for more as always!

Salman will perform on tracks like Bang Bang, Tosse Pyaar Karte Hai Gori, Love Love Me and Man Ko Aati Bhave. During the shoot, things started heating up as Salman rocked the stage with his signature style moves and the girls in the audience cheered to the extent that the security was called to handle his female fans on ground!

Apart from Salman, our desi girl Priyanka Chopra will deliver some scintillating performances on Raat Ke Dhai Baje and Desigirl this Sunday.

Since Comedy is the theme for the night, we have a very special guest who is synonymous with comedy in Bollywood, someone who Salman describes as his ‘Best dancing partner’… its none other than Govinda! He will regale the audience with his famous dance moves on comic tracks like Aaa aa eee, Haseena Mann Jayegi, Partner, Soni De nakhre and Mera naal. The event will be hosted by none other than funny man Sajid Khan who is sure to keep the audience in splits with his wise cracks. Giving him company, as the co-host is the inimitable Shreyas Talpade who has made a mark for himself in comic roles. Watch out for the duo’s camaraderie as they put up a hilarious act for the viewers!

The star studded line –up does not end here as we have the original item girl and controversies favorite child Rakhi Sawant heating the stage up with her saucy moves on tracks from her latest album with Ishq Bector. Sameera Reddy too will sizzle on the stage on Paisa Paisa, Twist, Race and Dil bole haddipa,
Continuing the Comedy theme, television artists like Gaurav Gera, Ali Asgar, Kashmira and Krushna and Naman Shaw will also put up an act on a medley of some of the most comical songs of Bollywood.