Saif Ali Khan – I was quite bad actor when I started 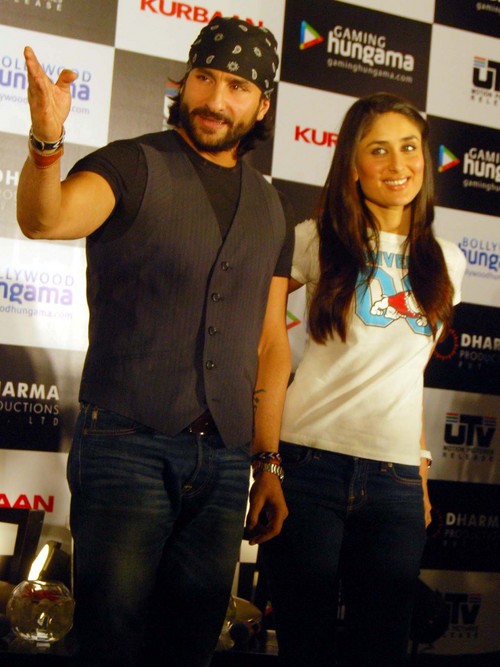 SAIF ALI KHAN tells JYOTHI VENKATESH that he tries to re-invent himself as an actor with every film of his.

Do you think Kurbaan has not clicked at the box-office, because the masses seem to prefer comedies these days?

Though I am aware of the fact that today everybody makes comedies; there is nothing wrong in being serious. The flavors keep on changing as far as Bollywood is concerned. Some films set the trend, whereas some follow the trend. I feel that because comedy is the flavor of the season, it is good that Kurbaan has been released now. I readily agreed to be a part of Kurbaan, because a filmmaker like Karan will not approach any actor unless and until he has a well-etched role for him. I also knew that Rensil ’Silva was a director to watch out for.

How was the experience of playing a character like Ehsaan in Kurbaan?

I liked playing the character of Ehsaan in Kurbaan. Ehsaan looks like a very intelligent, nice, warm kind of a guy but is actually deeply tormented and quite dangerous too. I should say that it was fun to play a character who is not what he seems to be. As an actor, you do many films and enact various parts. It was nice for me as an actor to let the background music communicate many times. It is an anti performance and hence it was fun playing it. I made it a point to use the medium of cinema to communicate.

As an actor do you feel it is essential to relate to your role?

Though I feel that it is very essential to relate to your role as an actor, I should confess that I did not relate to the role of Langda that I played in Omkara. However all said and done I should also say that Ehsaan’s reactions could be the same as that of mine. I tried to understand the headspace of the guy. I thought that it was an interesting role. It is interesting to note that though Kurbaan was a film with the backdrop of terrorism; it was quite an anti terrorist film.

What is Rensil D’Silva’s contribution to the film as a director?

This is the right time for some one from the ad world like Rensil, who has the right sensibility, to make his bow in films. With Rensil at the helm of responsibility, I knew that Kurbaan could not have been the regular Hindi film with a terrorism background.

What do you think about your experiment as an actor vis-a-vis films like Being Cyrus and Love Aaj Kal?

I am happy that my experiment at taking up films of different genres like Being Cyrus and Love Aaj Kal has been received well. As an actor, I try to re-invent myself with every new film. I like to work with intelligent actors who know what they are doing. It is just my gut instinct. I have learnt from my mum’s career. I am of the opinion that people like the fact that a mainstream actor is trying to do something even if the film does not click at the box office.

Sometimes if you are off beat, you can really get creative. I feel that it is time to do something new, something that people do not associate you with. Like the role of the Sardar I did in Love Aaj Kal. The entire credit ought to go to Imtiaz Ali for having had the implicit faith in me that I could carry off my role in the film.

What is your role as a producer?

My idea, as a producer, is to make good films. Why should we ask people who are intelligent to go to Hollywood? Why should only mediocre people be there in Bollywood? I am happy, as an actor as far as Bollywood is concerned and have no plans whatsoever to try my luck in Hollywood. In any case, I feel that Bollywood is a fun term and should not be taken seriously.

After Tashan, did you agree to do Kurbaan just to be together with Kareena?

In Tashan I was cast opposite my red belt since Akshay Kumar was cast opposite Kareena. Kareena and I do not have to do a film to be together. I can always visit her on her sets and she can also do vice versa. She is very professional. I still remember her as an intense actress who was very spontaneous in L.O.C. She is very focused and controlled as an actress.

In what way have you grown as an actor?

I confess that though Kareena was not bad when she had started her career with Refugee, I was quite bad. I have grown over the years and groomed myself as an actor. I am learning every day and growing. You learn from all kinds of situations- some obvious, some not so obvious. I’d say that films like Parineeta, Dil Chahta Hai were milestones in my career while Yeh Dillagi was the turning point in my career

Do you hold any grudge against any director who did not use your potential in your initial stages as an actor?

It was not that the directors did not recognize the potential in me earlier. To tell you the truth, there was no potential in me earlier. Language of cinema has changed with Dil Chahta Hai. Only those who are frustrated and unsuccessful who hold a grudge against directors who had thrown them out of their films in the early stages. I do not hold any grudge against Rahul Rawail who threw me out of Bekhudi in which I was cast opposite Kajol and replaced me with Kamal Sadanha.