Reliance in talks with Steven Spielberg 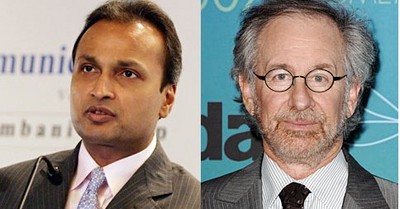 Reliance Big Entertainment, the media and entertainment arm of the $100 billion Reliance Anil Dhirubhai Ambani Group (ADAG) and Steven Spielberg and the founders of the DreamWorks studio are in talks to financing their new film venture , according to Financial Times report.

Indian conglomerate Reliance Big Entertainment will be investing up to $ 600 million in a new company headed by Dreamworks’ Steven Spielberg, maker of some of the biggest Hollywood epics in history. The new company is expected to have funds of up to $1.5bn including debt and equity.

The plans include financing up to a dozen films by top Hollywood talent such as Jim Carrey, George Clooney, Tom Hanks and Brad Pitt, and buying theaters and exhibition properties across the US and elsewhere in the world.

A tie-up between the two would plough Indian money into Hollywood and bring in its best practices to Bollywood.

Next post: Vijay unveiled flag for his fan club