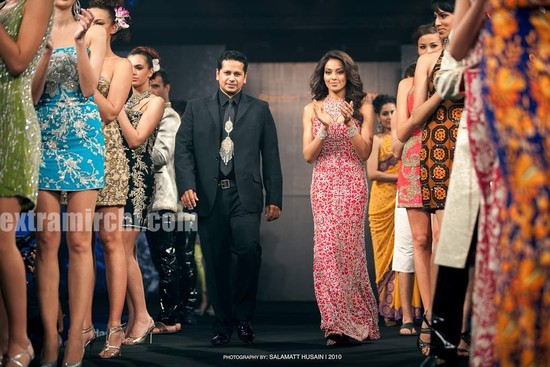 Dubai: In a move away from the norm, coutourier Azeem Khan unveiled his Summer 2010 Collections not at his flagship store in Mumbai but at the a solo show in the one of the most fashion conscious cities of the subcontinent : DUBAI . 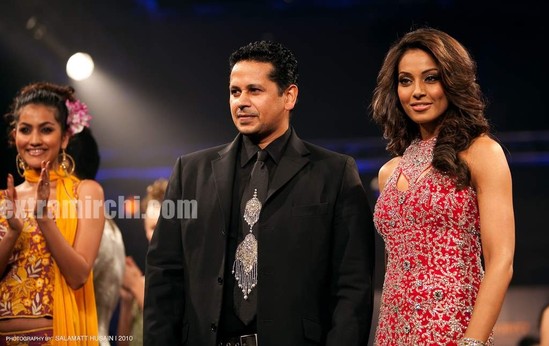 In his trademark style, Azeem Khan helds court with his Collection 2010 – alineup that subtly plays on the aesthetic of the paradox, the game of opposites, and the pursuit of a new illogical order that breaks all the rules. With his new collection Azeem Khan introduced, for the first time ever, his mens wear on the runway……………..taking Dubai by storm.

Walking the ramp in Azeem’s breathtaking creations were some of India’s leading models, while his showstopper was none other than the gorgeous Bipasha Basu. Bipasha walked down the runway in a ramp scorching red & silver creation. The ensemble was completely crystalized with swarovski crystals and French caviar beads. She looked stunning !

Drawing inspiration from the exotic Amalfi coast and Qashqai – a nomadic tribe from Iran (who weave the most exiotic carpets) Azeem Khan picks his way through a stunning spectrum of colors this summer. The designer is seduced by the power of orange and the entire collection sees tinges of the hue whether it is tangerine or lemon yellow or sunny yellow. The color spectrum begins with scarlet reds and fades to fuchsia and candy pinks. While flashes of lime greens, dusky heliotrope, deep violet, and turquoise also make an appearance this season, onyx black punctuates the collection. The men’s wear sees an array that ranges from whites to exotic camel with a variation that approaches bronzed gold. Collection 2010 marks the unusual use of mint for men.

Fine details are of strategic importance in the collection. Embellishment is restrained and less opulent. As a result, decoration is kept to a minimum but is prominent where used. While thread-work is predominant to give the effect of prints, swarovski crystals and caviar beads are also used for decoration. 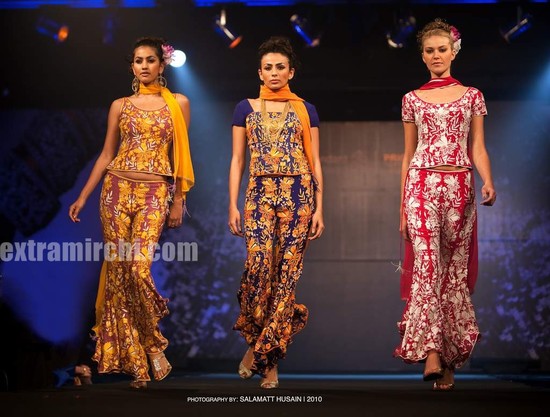 Chinese silk georgette, moiré, chiffons, linen, French satin, brocade, Japanese silk crepes are the fabrics used by the designer this season. Use of patent leather is an innovation that the designer makes with his Summer Collection 2010.

Azeem’s Mesnwear this season comprises perfectly cut jackets, suits, sherwanis and a collection of flamboyante ties that would draw attention and compliments, anywhere in the world!

Azeem Khan introduces Summer Collection 2010 that takes fluidity to a new level: comfortable but never excessively loose and always perfectly judged to deliver that feeling of total ease. Shape and cut are based on an anatomical analysis which delivers a harmonious visual effect, counterbalancing the broad and the narrow within a single garment. 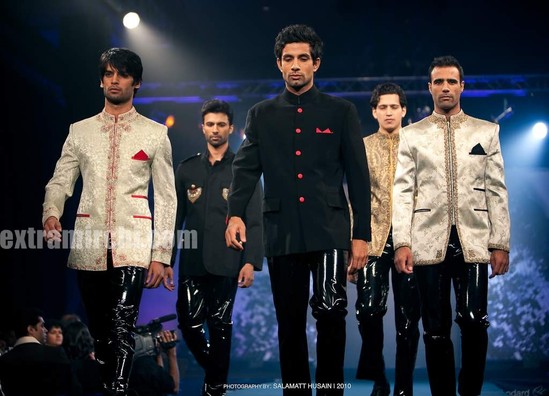 According to Azeem Khan ” I am very happy to have the first showing of my Summer Collections in Dubai. The response has been fantastic! I want women to celebrate overt femininity in a sensuous manner this season. For the men who are superstars in their own right, my menswear line is flamboyant and young. It is super stylish for men who want to make a statement!”. 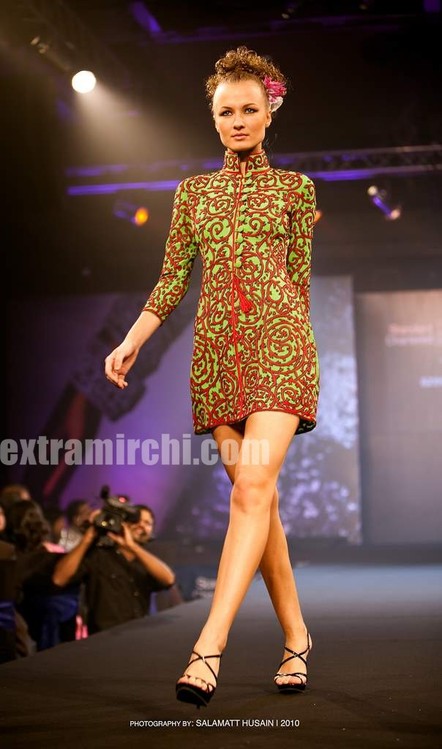