On His 66 Birthday, Amitabh Bachchan Hospitalised

The face of Bollywood, Amitabh Bachchan who turned 66 today was rushed to the Nanavati Hospital in Mumbai’s Vile Parle (West) suburb reportedly suffering abdominal pain and then shifted to the Lilavati Hospital in Bandra where he was under observation, according to reports. 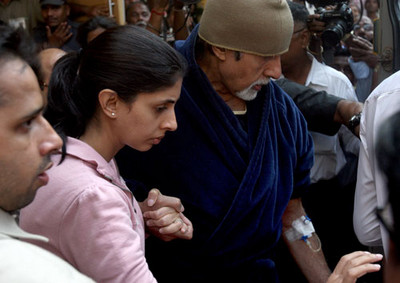 Amitabh? who is shooting for Teen Patti i was in the midst of his birthday celebrations at his bungalow Pratiksha in Juhu was rushed to the Nanavati Hospitalcomplaining of abdominal pain and breathlessness. AFP Reports that

He has stomach pain and is undergoing tests in Lilavati Hospital. Actor’s condition as “stable” but could not confirm one report that he had an incisional hernia.

Next post: Anushka Pairs With Karthi in Lingusamy Movie