Mahabalipuram – where Aamir Khan is unknown!

Looks like Bollywood superstar Aamir Khan has become fond of Chennai as he keeps visiting the place regularly. Recently, after his visit to Chennai, he headed for Mahabalipuram disguising his looks. 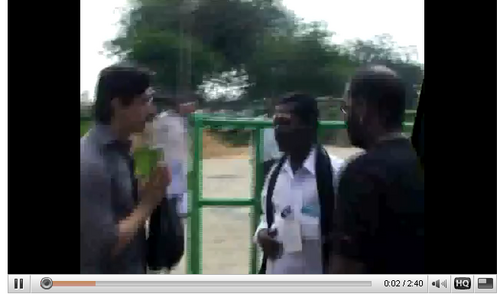 As he went around seeing the sculptures, he got friendly with one guide. As Aamir was chatting with him, he revealed his true identity asking whether he knows him. But Mr. Perfectionist of Bollywood was a little disappointed when the guide came up with a reply that he is not aware of any actors.

Mahabalipuram: guide of Aamir Khan does not identify the actor even he discloses his identity.

Naturally, it was Aamir’s turn to bring his rival Shahrukh into the picture asking him whether he knows that actor, only to hear the same reply. The Aamir asked whether he never saw any Hindi films. The guide replied that he saw only one Hindi film ‘Shalimar’ and further added he knew only Dharmendra and Amitabh Bachchan.

Aamir Khan gifted him a ring before he left. The guide also told him that he also wanted to gift and presented Aamir with a small Ganapathy idol.