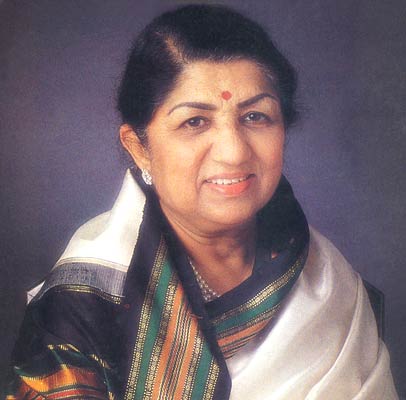 She has won every award worthy of her stature including the highest civilian honor the Bharat Ratna in our country.

Yet when the French displaying impeccably good taste as always decide to confer their highest cultural award the Officier de la Legion d’honneur on Lata Mangeshkar she humbly bows to another acknowledgement of God’s generosity.

“I don’t know why God continues to shower his largesse on me when I’ve reached an age when I’ve received more love and honor than any human deserves. But the French are a class act. And I feel doubly honored to be chosen by them.”

Lata ji will be getting the award at an event at a suburban hotel in Mumbai on December 2. “It would be part of the French Film Festival being held next week. They’ve sent me some invites, which I’ve given to people very close to me. The rest of the film industry I’ve no idea about. I know I’ve the industry’s blessings, though.”

Among the invitees to witness Lataji’s French honor, Amitabh Bachchan is also expected to attend, though the premiere of his home production in on the very next day (December 3).

Earlier Big B received the same award at a function in Delhi last year, though he was conferred the award after Lata ji.

Says the Nightingale, “Actually I got this French honor three years back. But I was in no condition to receive it. I was actually on drips when I was informed about the award. Now when I had completely forgotten about it they called to say they’re giving me the award on December 2. I thought they had forgotten about it too,” she laughs her still-girlish laughter, and adds, “Actually, I think it was my Rakhi-brother Shivaji Ganesan who was the first Indian artiste to be given the Légion d’honneur. Then came me and Amitabh ji.”

Must say the French have good taste.

Laughing at the observation Lata ji says, “People say recognition has no meaning beyond a certain stage in one’s growth as an artiste. I say it’s never too late to be told people love you.”

Next post: Rajni’s daughter did not repay 1.6 cr – High Court stays release of her film