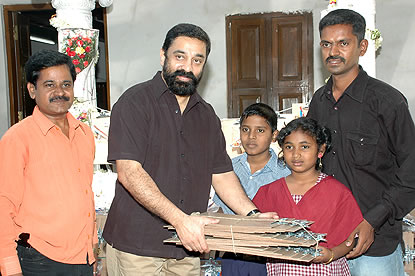 Kamal Haasan is a rare actor in Indian film history, who channelizes the affection of his fans towards social activities rather than using them to boost him image.
Now Kamal Haasan’s fan club( Narpani Iyakkam) is donating essential stationary items for around 30000 students, all over the state which woud cost Rs. 8 lakhs for Kamal Hassan.

Kamal himself inaugurated the scheme on March 2 in his office in Chennai. Sridharan, who received Tamil Nadu government?s award for best teacher, and Dr. Raghupathy participated in the event.

Fan club around state is making arrangements to organize similar events to give away items.

For Kamal , the social interaction is more significant and important to uplift the poor and needy. We salute his activities !.