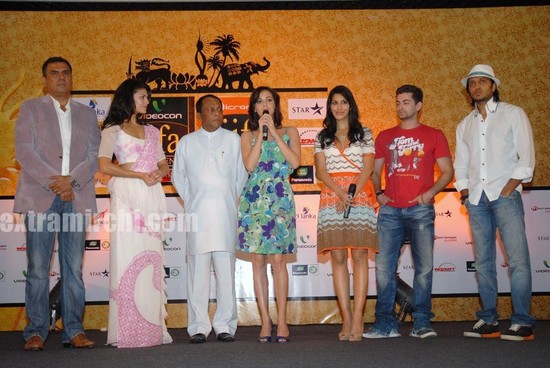 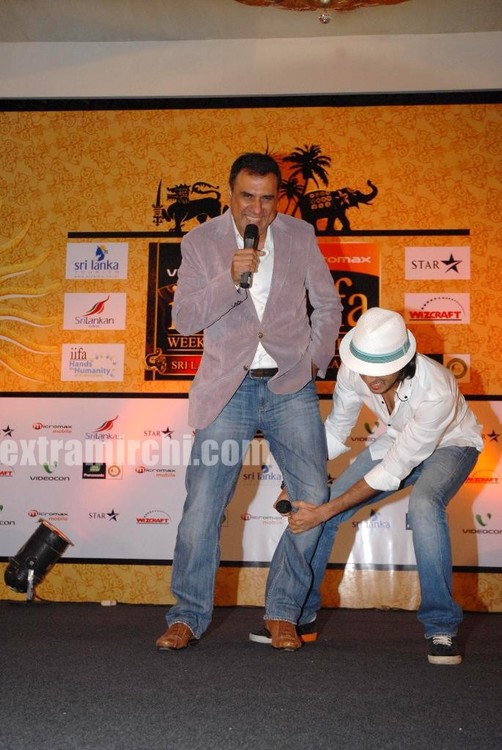 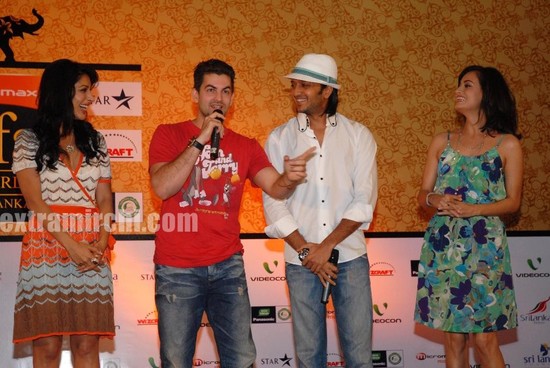 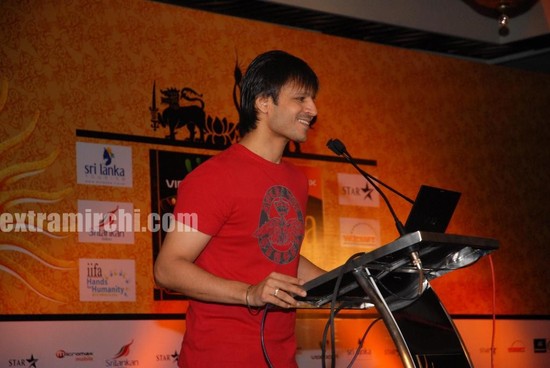 Colombo, June 3, 2010: IIFA raised the curtain on its second decade of celebrations in Colombo, the bustling heart of Sri Lanka. The 3 day Videocon IIFA Weekend, which reaches its pinnacle with the Micromax IIFA Awards plays host to the who’s who of the Indian film industry, the corporate world, dignitaries from India and the region, world media and Indian Cinema fans from across the globe. The Videocon IIFA Weekend 2010 will showcase the IIFA Foundation Fashion Extravaganza, FICCI-IIFA Global Business Forum, IIFA Foundation Celebrity Cricket Match, IIFA Film Workshops and the ultimate in glitz – the Micromax IIFA Awards.

The Videocon IIFA Weekend is expected to garner massive international coverage for the country, showcasing Sri Lanka as the destination of choice for business enterprise and tourism. Deputy Minister of Economic Development for Sri Lanka- Hon. Lakshman Yapa Abeywardana said, “With the dawn of the new era in our island, Sri Lanka, which is renowned as the “Pearl of the Indian Ocean” has great potential in expanding its vistas in Investment, Tourism, Agriculture and other sectors that will immensely contribute towards the rapid development drive initiated by the Government. IIFA will play a vital role in further strengthening the mutual cooperation of the two nations.”

Speaking on the way forward and growing importance of the Sri Lanka-India partnership, Sabbas Joseph, Director, Wizcraft International said, “IIFA is pleased to partner with Sri Lanka Tourism to initiate engagement and discussion for exciting projects, focused on the north and east regions of Sri Lanka. Our work with the UNICEF, Habitat for Humanity and the discussions at the FICCI IIFA Global Business Forum, will bring focus to the development and reconciliation process at Sri Lanka. With the glamour quotient being at an all time high we are delighted that all roads lead to Colombo, as IIFA puts on a grand three day show in the heart of Sri Lanka. ”

Day one of the much awaited Videocon IIFA Weekend will be set in motion with the IIFA Global Press Conference with over 400 local and international media in attendance. The first night of the Weekend will see the trendsetting IIFA Foundation Fashion Extravaganza which will be a trail blazer event in Colombo, with Indian and Sri Lankan fashion designers showcasing their collections. The stylish duo of Viveik Oberoi and Dia Mirza will host the trendy night. The extravaganza is presented by Avirate Fashions from Timex Garments in association with Gitanjali Lifestyle.

The IIFA Foundation Fashion Extravaganza will be spread over two days and is of special significance as it supports the IIFA Foundation. The Foundation is a charity organization set up by the IIFA’s to support families of the film industry workers who have been adversely affected during the production of films. This year, the fashion extravaganza, ‘IIFA Rocks’ will feature Indian designers Manish Malhotra and Vikram Phadnis and leading Sri Lankan designers Yoland and Kanchana (KT Brown).

Speaking on the association with the IIFA, Mr. Sunil Tandon, Chief Marketing Officer, Videocon Group said, “We are delighted to partner with the IIFA and present the Videocon IIFA Weekend for the second consecutive year. The Videocon brand has evolved over the past year to emerge as a vibrant convergence of next-generation entertainment, convenience and communication. The Videocon IIFA Weekend is an extravaganza that brings together and showcases Indian entertainment on a global platform and presents us the perfect opportunity to celebrate our brand evolution amidst India’s colourful cultural diaspora.”

Micromax, the title sponsor of the IIFA Awards 2010, today unveiled the IIFA edition of Micromax Q55 Bling mobile phones. Business Director, Micromax Mobile, Vikas Jain said, “Today mobile phones are the nucleus of entertainment for Gen X, who don’t just look out for mesmerizing or couple of fascinating features, but indeed, want the best of both to be packaged in the right mix. The new Micromax Q55 Bling IIFA limited edition phone is set to deliver it all, and to be precise, it’s set to rock the entertainment lovers with an exhilarating IIFA experience. The Micromax Q55 Bling phone, is an altogether unique category in the mobile telecommunication services that would reinvent your experience with the gadget each time you hold it to do something new.”

Day two kicks off with the FICCI-IIFA Global Business Forum presented by ERI (Environmental Resources Investment PLC.) The Forum will be inaugurated by HE the President of Sri Lanka, Mahinda Rajapaksa and will be addressed by respected personalities from the world of business, entertainment and cricket from India and Sri Lanka.

The morning session of Day two consists of an IIFA Film Workshop, held for aspiring students in film related studies. An expert panel from the Indian Film Industry with eminent speakers like Director, R. Balki, international actor, Anupam Kher and Sri Lanka’s own, Jacqueline Fernandez will share their experiences with the students. The second part to the IIFA Film Workshop is a networking session amongst distinguished personalities from the Indian and Sri Lankan Film Industries. This interactive session will include topics based on direction, film making, cost effective co-productions etc. This event is co sponsored by Event Concepts and the Ceylon Continental is the hospitality partner.

IIFA 2010 will host the IIFA Foundation Celebrity Cricket Match, in support of UNICEF’s ‘Cricket for Children’ project, to be played between India’s top cinema stars and Sri Lankan cricketers. Mandira Bedi, Chunky Pandey and Javed Jaffrey will host the match. Set to face-off are team captains of the three teams, Suniel Shetty, Kumar Sangakkara and Hrithik Roshan. Playing for the IIFA XI are Salman Khan, Dino Morea, Vinod Kambli and Kiran More, among others while Sanath Jayasuriya, Muttiah Muralitharan, Mahila Jayawardene support the Sri Lankan cause.

As a symbol of solidarity with the Sri Lankan people, IIFA in partnership with Habitat for Humanity and the Sri Lanka Tourism Promotion Bureau, will adopt and rebuild a village for refugees. The proceeds from the charity cricket match will be donated to this ‘IIFA Hands for Humanity’ project. The Literacy Partner for IIFA 2010, Linc Pens in association with IIFA is devoted to the cause of literacy and will be donating stationery to the IIFA model village in Sri Lanka. The IIFA Foundation Cricket Match is brought to you by Dialog Telecom.

The second night of the IIFA Foundation Fashion Extravaganza – IIFA Bling will feature celebrity showcases by designers, Rocky S and Nandita Mahtani. The night is sure to dazzle audiences as the Indian film fraternity walks the ramp. For the first time ever, the world will get to see a sneak preview of ‘Kingdom of Dreams’ wherein Hussain Kuwajerwalla, Isha Shravani and Gauhar Khan will perform a piece from the soon-to-be launched theatre production, which premieres on stage in Gurgaon later this year. The Videocon IIFA Weekend will culminate into the IIFA night of nights, the Micromax IIFA Awards 2010, on June 5th. Audiences will witness an exciting star studded line-up of performances that will include the likes of Hrithik Roshan, Salman Khan, Saif Ali Khan, Kareena Kapoor, Bipasha Basu, Riteish Deshmukh, Vivek Oberoi and Sri Lanka’s, Jacqueline Fernandez.

The Videocon IIFA Weekend and the Micromax IIFA Awards is being hosted by the Sri Lankan Tourism Promotion Bureau (SLTPB). Star TV will once again showcase the Micromax IIFA Awards to audiences globally, reaching out to millions of viewers. Panasonic will continue the Greening of the IIFAs and Sri Lankan Airlines will be partnering IIFA as the Official Airlines Partner. The IIFA Foundation Cricket Match is brought to you by Dialog Telecom. The Videocon IIFA Weekend will have Coca Cola as the Official Beverage Partner. The Literacy Partner for IIFA 2010 is Linc Pens. Reebok is the Apparel sponsor for the IIFA Foundation Cricket Match. Western Union has also come on board as the Official Money Transfer Partner. The Indian cinema stars are set to descend onto Colombo for the Videocon IIFA Weekend from 3rd-5th of June, 2010.

Conceptualized and produced by Wizcraft International Entertainment Pvt. Ltd. and supported by the key members of the Indian film fraternity, IIFA is the most appreciated South Asian film academy. Also, the IIFA Awards is India’s biggest media event. With a viewership of almost 600 million, it is among the world’s most-watched annual entertainment events. From a one night celebration in 2000 at the Millennium Dome, London, the last ten years have seen the International Indian Film Academy (IIFA) movement grow into a cine-packed weekend of film-festivals, workshops, exhibitions, film-showcases, global business forums and sporting events, all of which climax into the highlight of the Weekend, the IIFA Awards. In the past, IIFA has been celebrated in London, Sun City, Johannesburg, Singapore, Malaysia, Dubai, Amsterdam, Yorkshire and Bangkok. Last year, IIFA celebrated its 10th year anniversary in Macau. The IIFA Weekend 2010 promises to be a grand, action-packed event; while the IIFA Awards will seek to honour the very best of Indian Cinema. For more information, go onto www.iifa.com

The Sri Lanka Tourism Promotion Bureau’s (SLTPB) mission is to inspire, build and deliver ‘Sri Lanka Tourism’ to be the key driver of Sri Lanka’s economic growth. Delighting customers with passion and excellence is the SLTPB’s goal and by this, it hopes to enrich the incomes of industry stakeholders and benefit the community. Strong investment and focused attention on marketing and reaching high yield markets, particularly the youth market in countries such as UK, India, Middle East, Germany, Japan and China will drive the SLTPB forward during the next few years. The SLTPB will pursue a major public relations drive that will strive to promote and build the country’s image. The next few years will witness change both domestically and globally. Intensified pressures due to climatic change, rapid evolution in consumer attitudes and expectations, and further changes to security and bio security would be the key influences.