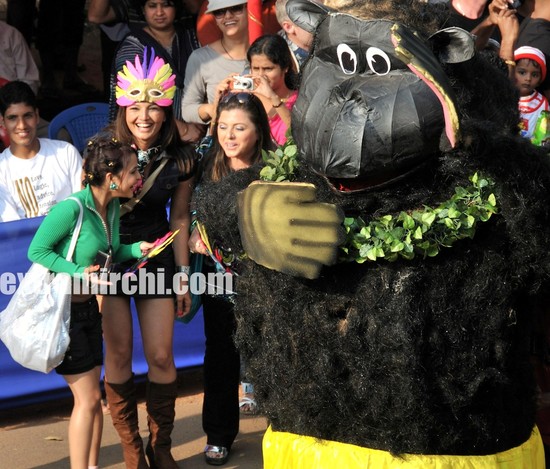 Talented actress Deepshika Nagpal who is busy with her maiden production and directorial venture ,”Yeh Dooriyan” believes that somebody up there loves her. “ I had taken a big risk by going down to Goa to shoot 2 of my songs sequences during the recent carnival. Everybody had warned me against it saying it would be a night mare to pull a dancing shot through those crazy crowds. But I still went ahead, logic being worst come worst what will happen, we will come back empty handed , right. So I started off to Goa along with my principle cast i.e. Delnaaz Paul, Chitrashi Rawat and debutante Keshav Arora .

We got all the required permissions ,but even then we were scared and I told my team to be prepared for wasting hours. But as they say fortune favors the brave, we got a nice location to shoot . A clown pulled us in. All of us danced to gay abandon with the camera chasing us . We got the million dollar shot what we wanted in 3 hours flat. Hence I let the unit spend the rest of the day, shopping and having a ball. “grinned the very happy Deepshika ,who had planned to spend at least 5 days in Goa for the same purpose.
her film is the first ever film which is shot in the ongoing carnival

Going on, she says,” These songs are critical to my film as they will add glamour to the final product. Besides the carnival we have also shot at casino’s, beaches and other hot Goan night spots Choreographer Longinus was very happy as the songs have been pictured very well. Deepshika who is herself playing an important role in this film of 3 female friends took advantage of the beach setting and wore a sexy bikini “ I always believe if you got it, flaunt it. But it was not easy as I really had to tone my body, otherwise it looks bad on screen.”