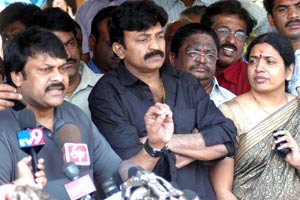 Telugu megastar Chiranjeevi apologized to actor Rajasekhar, after his fans attacked the Rajasekhar and his family(story here).

Subsequently after the incident , Chiranjeevi and his brother-in-law and film producer Allu Aravind met with Rajasekhar and his family, and strongly condemned the incident.

“I strongly condemn the attack. I appeal to my fans not to indulge in violent acts in future,” an emotional Chiranjeevi said after meeting Rajasekhar’s family.