Bipasha Basu: “I don’t have any New Year resolution. But I’ve been working very hard on this fun activity for the past few months which I can’t talk about until I’ve mastered it. No it isn’t film-related. I do have a life beyond the movies, you know. My only resolution for 2010 is, Love Yourself.”

Katrina Kaif: “I wish for lots of hard work and hopefully more hits.” 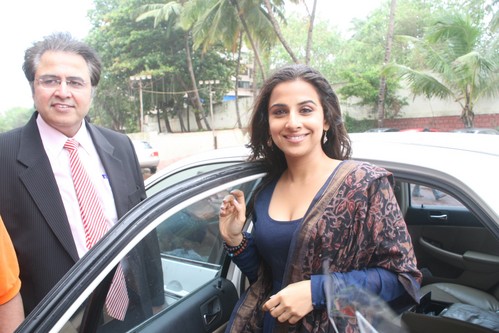 Vidya Balan: “What hopes do I have for 2010? Oh plenty! 2009 got me the most amazing role in ‘Paa’. Watching Mr Bachchan at work I realized that I was going on the right track. Being focused on your work to the point of shutting out everything else is not something I needed to feel guilty about. That’s the lesson I want to implement in 2010. Now after playing a mother to a 13-year old in ‘Paa’ I’m all set to be seen as this full-blown, seductive, sexually-charged woman in ‘Ishqiya’. It’s a role, character and territory that are totally alien to me. I enjoyed getting into the sensuous space. It brings an entirely new perspective to my personality for the audience. That’s what I’m hoping for in 2010… to find new aspects to my personality through the roles I play. As for a man, I can’t see anyone dur dur tak. Find me a man as cultured and suave as Gulzar Saab and I’d gladly exchange my single status for companionship.”

Mugda Godse: “My co-star Bobby Deol is such a sweetheart. I hope to find a guy like him this year. Where are all the gentlemen?”

Neil Nitin Mukesh: “In 2010, I hope to further strengthen my position as an actor. I’ve three films in 2010 with Pardeep Sarkar, Ken Ghosh and Abbas-Mustan. Oh yes, my New Year Resolution is to talk more freely about my girlfriend publicly. We may even get engaged.”

Pratik Babbar: “I look forward to being busy the whole year.”

Irrfan Khan: “Beyond the New Year I’ve made no plans. I’ve noticed every time I’ve chalked out a plan for myself life has humbled me. I leave all my plans to God. I must say he does a good job of it. I hope he continues to do so this year too.”

Shekhar Kapur: “As for my resolution for the coming year I just want to direct another film. I admit my output so far has been somewhat measly. I want to change that, starting in 2010.”

Dino Morea: “My New Year resolution is to do only quality work. I don’t want to be taken for granted anymore.”